The new milestone release, 9.1 for ATLAS.ti Windows and Mac introduces a number of great new features and functions, many based on users’ requests. Get an overview below.

The Welcome Screen has received a Make-Over

In addition to a sleeker new overall design, you can now hide the News and Resources section to have more room for the list of projects. 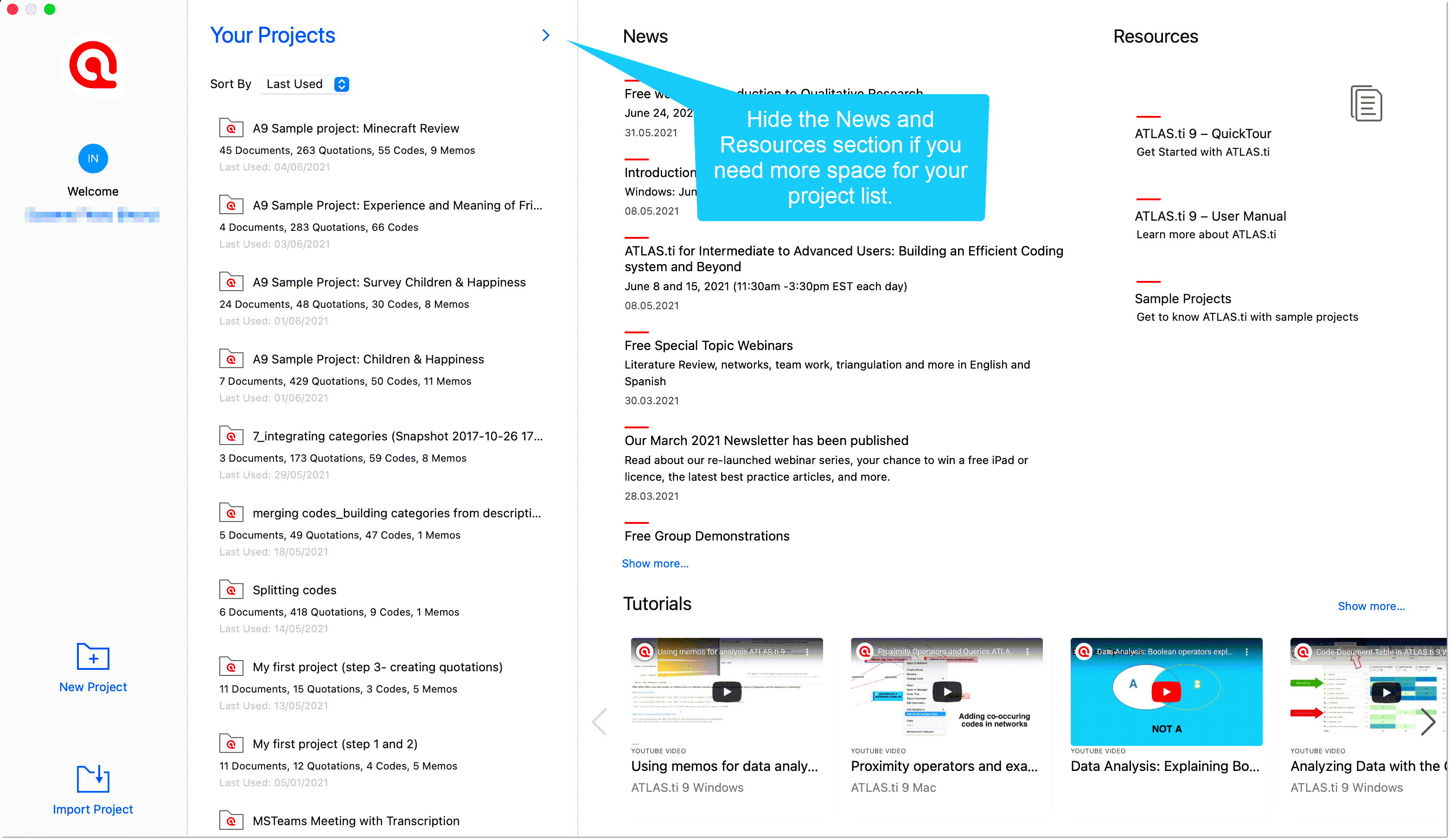 The Code Cloud and Bar chart view is here!

You now get three view modes in the Code Manager: You can view codes in list view (default), as a cloud, or in the form of a bar chart: 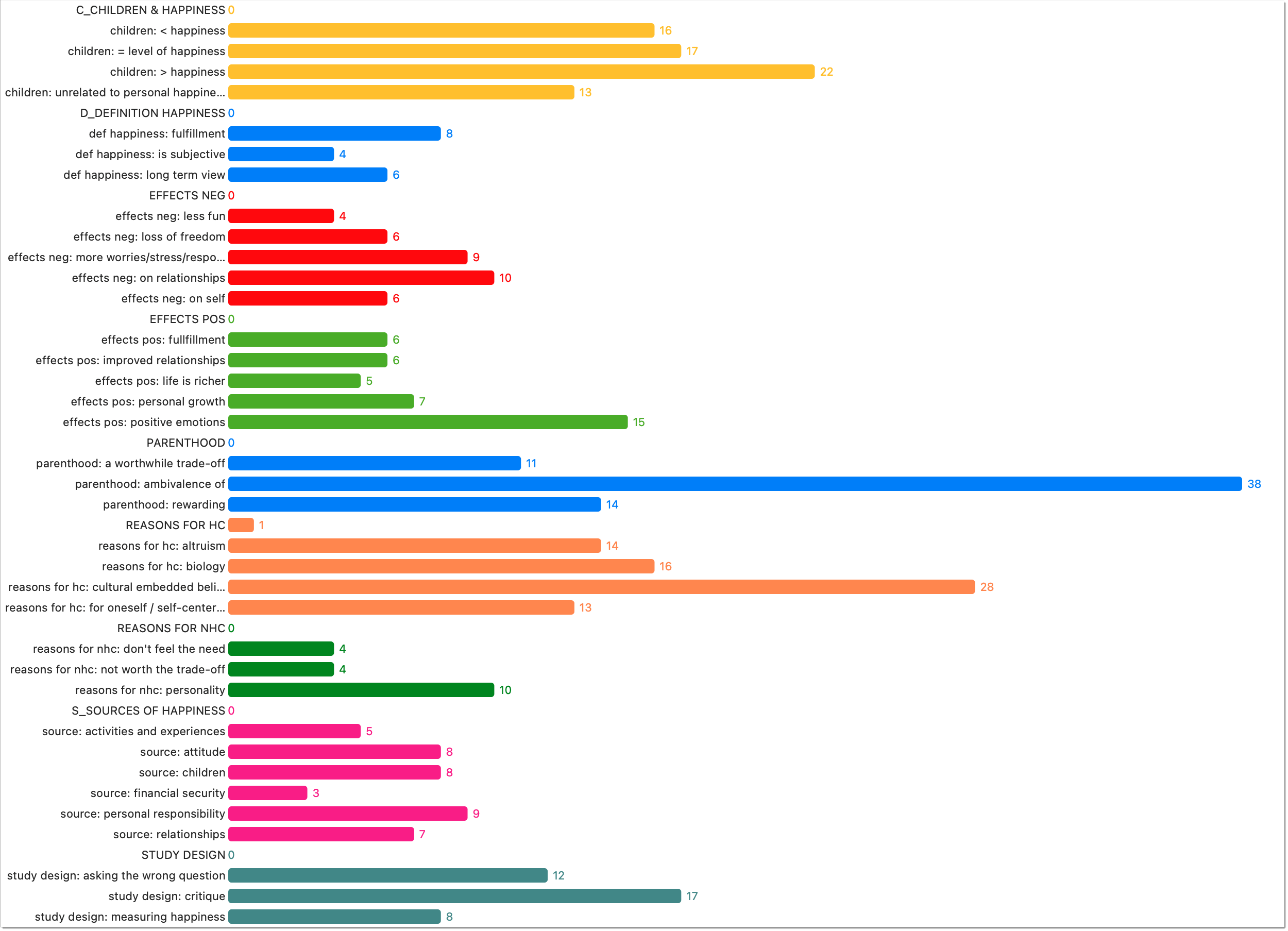 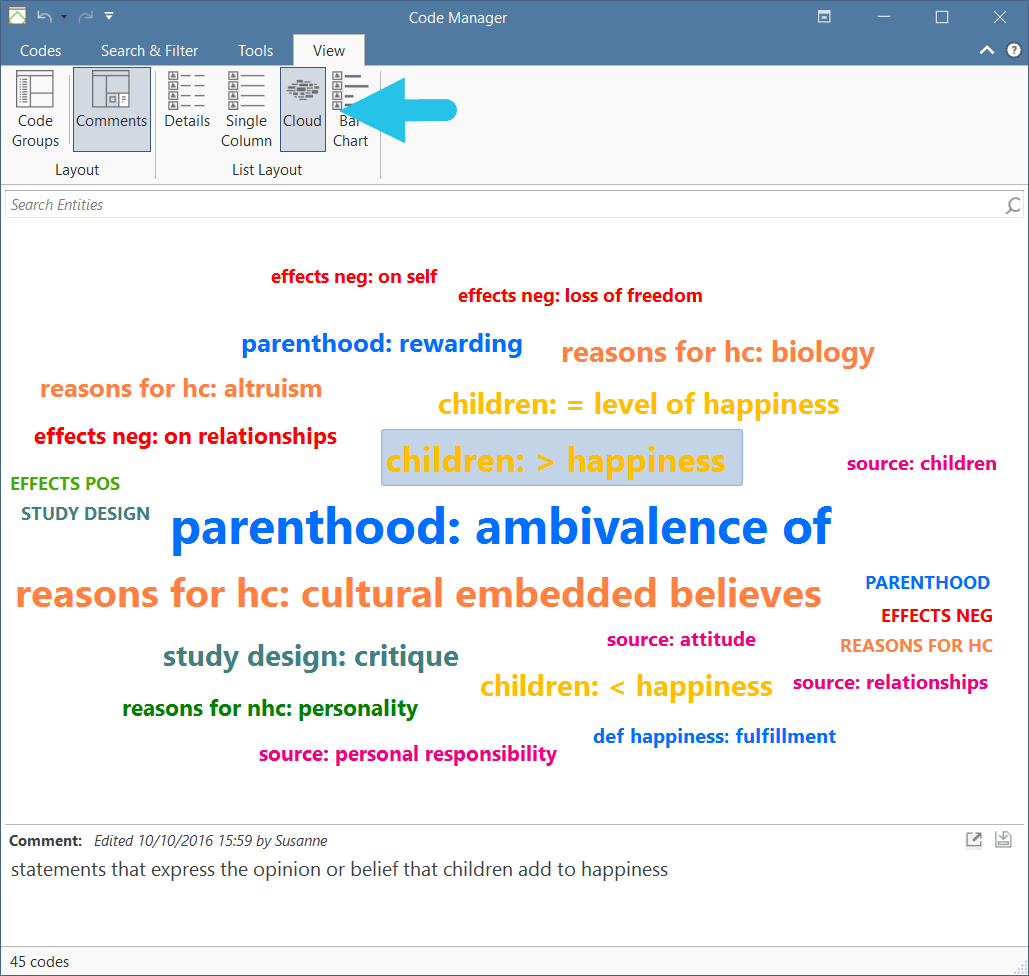 
Code renaming in the margin

Improving the workflow in ATLAS.ti Windows - renaming a code in the margin area

Especially when still developing the code list, it occurs frequently that you want to adjust the code name. Up until now, you needed to do this in the Project Explorer, Code Browser, or the Code Manager. This was always a step away from the current work context.

Now, you can simply right-click to change the code name, and don't have to move somewhere else, interrupting the workflow. 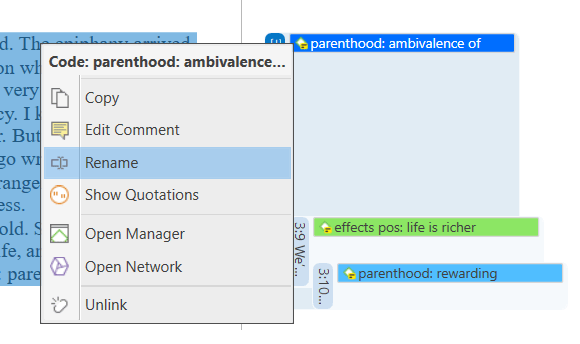 Double-click on a word in a word cloud or word list to find all sections where the word occurs in the context of the data. 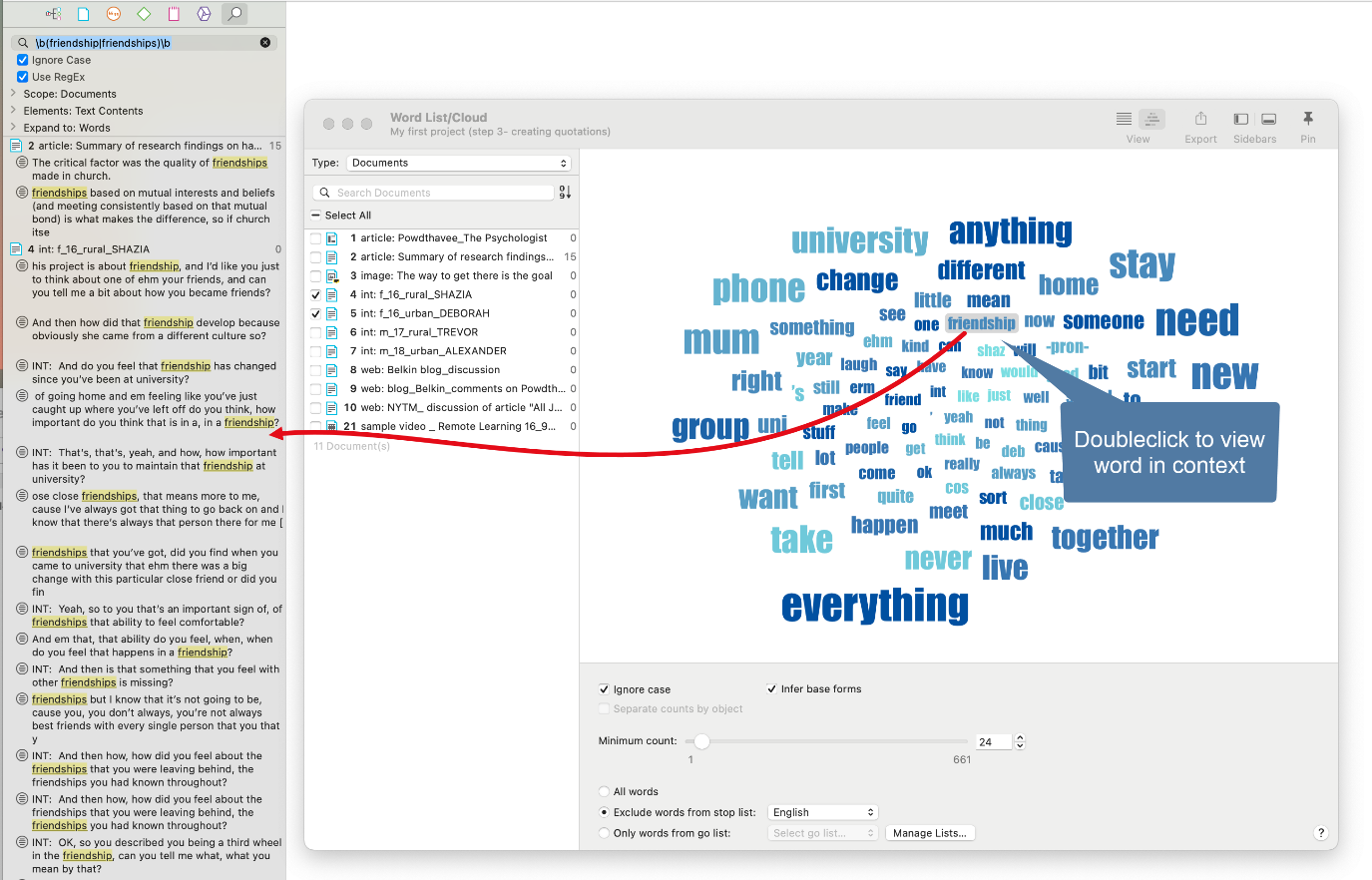 If you want to print a document as you see it on your screen including the margin area, select the Print option in the Document Ribbon. 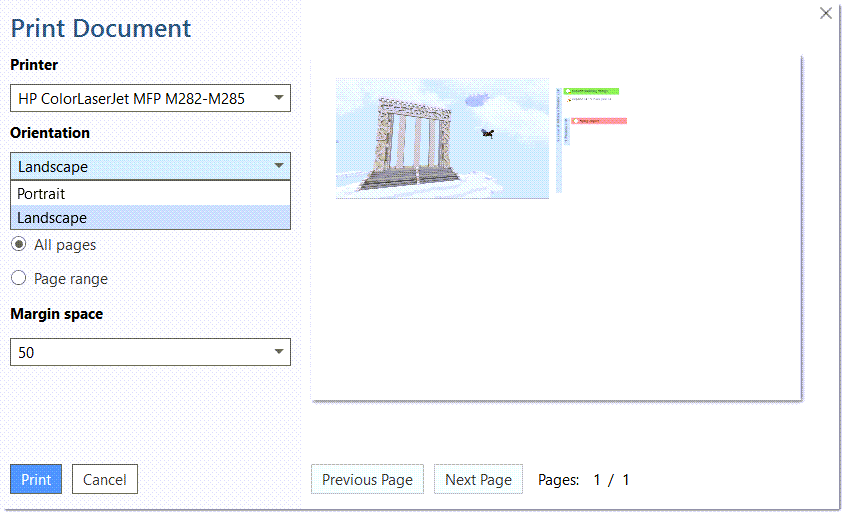 Orientation: The default selection is 'Landscape', as this is likely the best option to see the document and all codes in the margin area.

Margin space:Under 'Margin space', you can adjust the width of the margin if you need more or less space.

Pages:You can print all pages, or a page range.

You can preview all pages using the 'Previous' and 'Next Page' buttons.

Searching for AND occurrences only in the Code Co-Occurrence Table

You can now switch between the Co-occur and the AND operator. This allows you to only search for codes that code exactly the same quotation:

Figure 5: Search for AND occurrences in the Code Co-occurrence Table (ATLAS.ti 9 Windows)

Depending on the entity type, possible neighbors for nodes in networks are: Documents / Quotations / Codes / Memos and Groups

Adding code neighbors to a document node, or a document group node for instance allows creating case-based network. You can ask questions like: Which of the codes have been applied in which document or document groups. ATLAS.ti draws a blue lines between the codes, and the documents / document groups in which they occur.

The new option, adding document neighbors to codes, allows you to ask the question the other way around: "In which documents do the codes occur?" 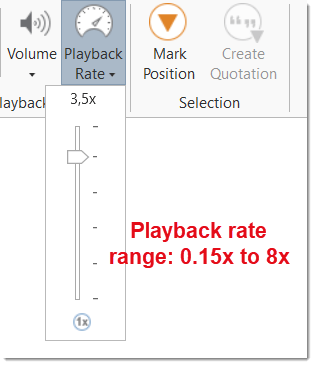 The range of playback speed for audio and video files has been increased. Extra slow and extra fast playback speeds can now be set.

Mac: Copying a quotation now puts a citable reference in the pasteboard

Copying a quotation into a memo is for example useful if you want to include key quotes in your report.

Figure 9: Copying a quotation with reference in ATLAS.ti 9 Mac

If you copy a quotation and paste it into an editor (be that a comment field or a memo in ATLAS.ti, or a Word document outside of ATLAS.ti), the full reference information for this quotation-quotation number, location and document name-will also be added.

Copying a quotation into a memo is useful, for example, if you want to include key quotes for the report.

It is now also possible to merge users in ATLAS.ti 9 Windows. This is especially important for team projects, when you by mistake duplicate users when merging projects. It is also useful when users did not pay attention under which name they were logged when coding data for a later inter-coder agreement analysis. Merging users allows you to fix mistakes that occurred down the line in the process. To merge two users, simply drag one user on top of another. 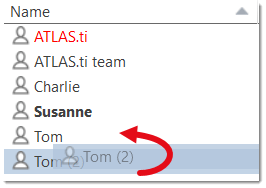 This functionality is also available in the Mac version.

Another new option is to set the current user. This allows you to select a user from the list of currently available users. 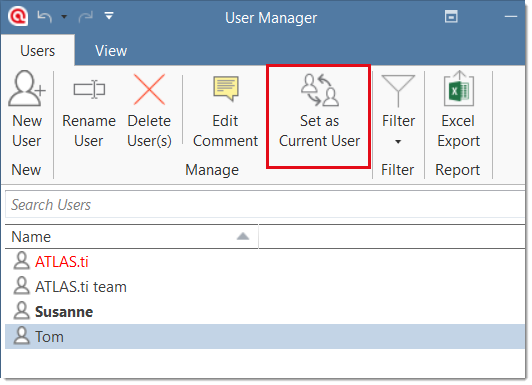